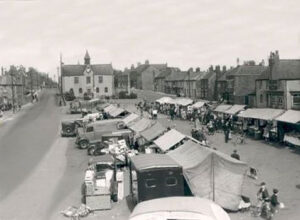 Ferryhill Town Council covers 870 hectares and includes the areas of Ferryhill Station, East Howle, Metal Bridge, Chilton Lane, Dean Bank, Mainsforth and Ferryhill Village. This is a brief history of the area. Ferryhill stands 538 feet above sea level and is built on limestone. It is situated 25 miles south of Newcastle and 12 miles north of Darlington with a population of over 11,000 inhabitants. An Anglo Saxon charter in 900 AD shows a settlement existed in this area although it wasn’t named.

There are several theories regarding the origin of the name Ferryhill. One of these is that the last wild boar of Brancepeth was slayed by Sir Roger de Fery in 1200 AD near the site of Cleves Cross Farm and there is still a plaque in the Cleves Cross area of Ferryhill to commemorate this.

This story was authenticated in 1867 when repairs to the farm at Cleves Cross were carried out. The remains of a pit were found and experts at the time said that this was the pit in which the boar had been trapped before being slain. 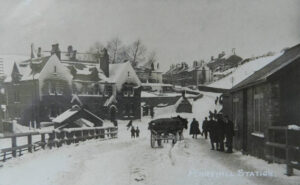 Another story is that Ferryhill took it’s name from a ferry (river) which flowed through the limestone gap where the main railway line now runs. There was a ford across the river at main ford (now Mainsforth) but further north a ferry crossed between Cleves Cross on the west bank and Swan House on the east. The existence of the village on the hill-top near by may have given rise to the name Ferryhill.

In the Middle Ages, many references were made to Ferryhill in the Court Rolls of the Abbey of Durham. Most of the land was held by the Abbey including a wood, park, watermill and windmill. At this time the Prior and Convent had a court house, chapel, swannery and fish pond in Ferryhill.

The medieval hamlet of Ferryhill consisted of farming families who paid rent to the Abbey. Although the major activity was farming, it is recorded that in 1347, Robert Todd and Hugh Smith paid 30 shillings to the Abbey for the right to mine coal. Also, in 1354 coal mines and seams of coal were leased to the Prior of Durham for the thirty year period.

Mining and agriculture existed side by side in the village for hundreds of years. During this period there were many coal mines in the district but they were small and employed few people.

This changed around 1840 with the arrival of the railways. New, deeper and larger mines were sunk as rail transport gave access to larger markets. Leasingthorne was sunk in 1842, Little Chilton (Bull Crag) 1852, Broom 1870, Chilton 1872, East Howle 1873, Mainsforth 1876 and Windlestone 1876. The owners of these mines provided local housing for their workforce, however, a small number of miners living in Ferryhill travelled to them.

Mainsforth Colliery was initially sunk in 1872 and was worked until 1876 before being laid in. The site was re-excavated in 1900 and the Colliery reopened in 1904.  On the closure of Dean & Chapter Colliery on 15 January 1966, pumping was stopped and the water ran to Chilton, Leasingthorne and Mainsforth, reaching Mainsforth in September 1967, and caused the Colliery’s final closure on  3rd December 1968.

Today no mines remain in Ferryhill and the dance halls and cinemas, which provided entertainment for the once growing population, have closed. Various companies have moved into the area and Dean and Chapter Industrial Estate has been created on the site of the former Dean and Chapter Colliery to provide employment. 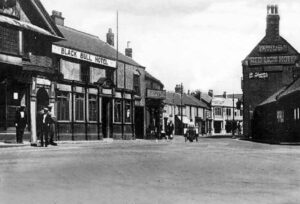 Dean Bank Recreation Park, which was originally created by the former Dean and Chapter Colliery, was conveyed to the Town Council in 1966 and now provides football pitches, multi-use games area, picnic areas and children’s play areas for the public to enjoy.

The land which was part of the former site of Mainsforth Colliery was conveyed to Sedgefield District Council in 1974 and then in 1998 it was transferred to Ferryhill Town Council. It has now become a Recreation Complex with cricket square, bowling green and football pitches.

One of the best known buildings in the town is the Town Hall which was built in 1867 on the land vacated by the first St. Luke’s church using left over stone from the original building.  This great building has served many uses over the years including a library and reading room but today houses the offices of Ferryhill Town Council.

In 1683, Jan. 25, Andrew Mills, a servant boy, murdered his employer’s three children at Brass Farm – now High Hill House farm- between Ferryhill and Spennymoor. Mills was gibbeted from a tree, half, to a three-quarter mile north of Ferryhill. The children were buried as a mark of respect in an alter tomb in Merrington Churchyard.