Since the original dilapidated toilet block was demolished to make way for a new housing office, local residents continued for years to request the construction of a new public toilet facility.

In 2004 the Town Council undertook a town wide survey to find out if local residents were prepared to pay an increased Council Tax to cover the cost of the construction and running costs of the new toilets. The responses were divided so the Council decided it did not have a mandate to increase Council Tax to provide the facility.

The Town Council, however, continued to look for funding to provide the facility and in 2008, five of Ferryhill’s then Borough Councillors, namely Kath Conroy, Pauline Crathorne, Jim Higgin, Bernie Lamb and David Newell decided to pool their resources, raising £72,000 to cover the cost of building a new toilet block, together with the Town Council, who provided a piece of land at the end of the Market Place on which to erect the new toilets. The building also incorporates two shop kiosks, one at either end of the block, and as the Town Council agreed to maintain the facility into the future, the five Councillors were finally able to open the toilets to the public in 2009.  Both kiosks are currently occupied.

Any rent collected from the occupancy of the kiosks is, in turn, used to cover the running costs of the toilets.

In 2010 the Town Centre toilets won a prestigious Loo of the Year Award which it hopes to maintain in the future. 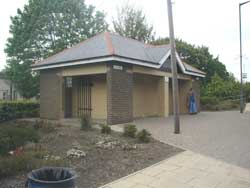 Over £11,000 of grant funding has been provided via SRB6 funds, which has been used to erect a new slate tiled pitch roof, and lighting to help to improve the general environment in the Ferryhill Station area.

The Town Council inherited the toilets at Ferryhill Station in 1974 during Local Government reorganisation.

Unfortunately, due to the Coronavirus Pandemic all Council public toilets are closed and will remain closed until guidance from the Government advises it is safe to re-open.

Public toilets are now available within the Dean Bank Park new Sports Facility. The toilets, which have achieved the top 5 star award in the Loo of the Year Awards, were funded as part of the ongoing regeneration of the Park.  Unfortunately, due to the Coronavirus Pandemic all Council public toilets are closed and will remain closed until guidance from the Government advises it is safe to re-open.

By contributing £2,007.50 each from their neighbourhood budgets, County Councillors Brian Avery and Christine Potts enabled alterations to be made to the existing Bowls Pavilion at Mainsforth Sports Complex, to create a new public toilet facility complete with disabled access for members of the public visiting the site. Directions to the facility which opened this year, are signposted throughout the Complex.

Unfortunately, due to the Coronavirus Pandemic all Council public toilets are closed and will remain closed until guidance from the Government advises it is safe to re-open.

Monday to Sunday: 8am to Dusk