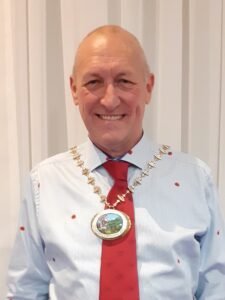 After being elected as Mayor by his fellow Councillors, Councillor Farry said “It is with great pride that I accept the Council’s decision to bestow on me the honour of the role of Mayor of Ferryhill.

I would like to thank the outgoing Mayor Councillor Joe Makepeace for his tremendous work over the past two years under very difficult times. Also, the Deputy Mayor Jacqueline Cansella, who will greatly missed as a Councillor, a lady who had great passion and drive for reform in Ferryhill”.

Dave who was born in Ferryhill but has had spells away living in London , North Yorkshire and Wiltshire. He has been a long standing Councillor for Ferryhill representing the residents of Ferryhill at not only Town level but also at Sedgefield Borough Council and Durham County Council.

Dave has a proven track record of delivering for Ferryhill and bringing investment into the Town.  The Shop Front Grant Scheme, Town Centre Improvements were just two of many improvements Dave has been involved in.  Dave was also successful in saving the Railway crossing and having the footbridge installed over the East Coast Main Line, and of course the great achievement as a Councillor and at the time Chairman of Ferryhill Community Partnership, was the reopening of the then closed Ferryhill Leisure Centre.

Dave said “With the support of my colleagues and like-minded Councillors, I will strive to work in partnership with residents and community groups alike to have a more responsive Council which will work for the whole community regardless of political view, or belief.

I ask for your assistance and your confidence that things can change. Do not just ask what Ferryhill can do for you, ask yourself what you can do for Ferryhill.”