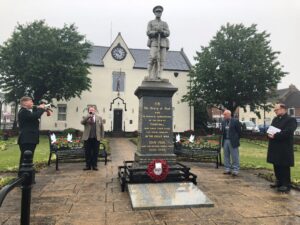 To mark Armed Forces Day a special service was held by Ferryhill Town Council on Saturday, 26th June in the Town Hall garden.

Town Mayor, Councillor David Farry, made a short speech to commence proceedings, which was followed by a service and prayers by Reverend Christopher Humble representing the Methodist Church.  At the end of the service, the Armed Forces Day Flag was raised by Lee Carter, Ex Second Battalion Light Infantry, to the sound of the bugles played by Ex Bugle Major Garry Suggett and Ex Rifleman Adam Gray.

Due to ongoing Covid restrictions it was not possible to invite the wider community to attend the event, however, the service was live streamed on the Town Council’s Facebook page, where it can still be seen.

Town Mayor, Councillor David Farry said ‘It was an honour to take part in the Armed Forces Day Service,  It is very important to demonstrate support for the men and women who make up the Armed Forces, and work so tirelessly to defend the UK and its interests.’

A video of this event can be found on the Ferryhill Town Council facebook page.