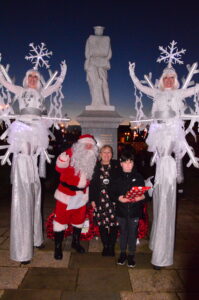 Hundreds of people turned out on a chilly, but dry evening to enjoy the town’s Christmas Fayre and Switch-on on Friday, 25th November.

Festivities began with a parade from St Luke’s Church to the Town Hall led by Sox and Bandit from Blackberry Donkeys and two pipers from Newton Aycliffe Pipe Band.

Christmas lights were switched on by Sam Shepherd, a pupil from Ferryhill Station School.  This was followed by children from Cleves Cross, Broom and Dean Bank Schools singing carols in the Town Hall garden.

130 children met Santa Clause in a specially created grotto built in the Town Hall to let him know what they would like for Christmas.  Each child received a selection box from Santa.  Surplus selection boxes have been donated to the Food Bank.

Earlier that day a craft fair was held in St Luke’s Church.  Alongside a variety of craft stalls, the Mayor of Ferryhill, Councillor Carolle Atkinson, held a tombola which raised £170 for her chosen charities, Endeavour Woodcraft and Ferryhill Ladder Centre.

A Council spokesperson said that it was disappointing that the canopy of lights could not be installed this year.  Following advice from a structural engineer it was discovered that suitable supports for the lights required more work than expected.  This meant that the canopy cannot be installed prior to Christmas.  Despite this, it was a fantastic event and it was great to see so many people in attendance.  A special thank you to all of the traders, entertainers and everyone in attendance that made it such a special event.

Further festivities are planned in the run up to Christmas including a Mayor’s Civic Christmas Carol Service at St Luke’s Church on Monday 12th December starting at 6.00 pm.  Refreshments will be served in the Church Hall after the service.  Everyone is welcome to attend.

Local school children will be singing Christmas carols in the Town Hall garden on Friday 9th December.  Children from Dean Bank School will begin the proceedings at 10.30, followed by Cleves Cross Infants at 11.00 and Cleves Cross Junior Schools at 11.15.

Santa will also be taking time out of his busy schedule to visit all primary schools in the town to deliver selection boxes.

Also keep an eye out for announcements on the Santa Tour which will be held on Thursday 22nd December.