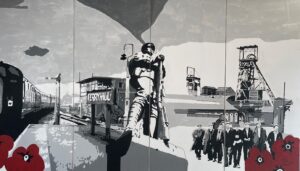 A mural dedicated to the heritage of Ferryhill has been officially unveiled by Ferryhill Mayor Councillor Carole Atkinson.

The mural, titled ‘Embracing our Past’, depicts Ferryhill’s mining history, sacrifices of the townsfolk in two World Wars and conflicts since and the town’s railway heritage.

Paul said he was ‘extremely proud and honoured to be asked by the Town Council to undertake the work’.  Assisted by Neve Lawson, an artist in her own right and boxer at Seconds Out Boxing Academy, which is run by Paul, the painting took over 300 man hours to complete.  The artists gave their time and skill for free, both regarding the opportunity to do so reward in itself. 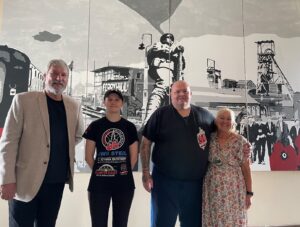 It was initially expected that the mural would be complete within 6 months however it’s taken longer due to covid restrictions and Paul’s ongoing health issues.

Paul collapsed whist attending a check up at Durham University Hospital.  Medical staff told him afterwards that his heart had stopped for 18 minutes and had technically died for that period.  Paul quipped that ‘it’s often said that an artist’s work is worth more after he dies.  On that basis the mural must be worth a fortune!’

Town Mayor, Councillor Carole Atkinson said she ‘We are all delighted and grateful for the hard work Paul and Neve have put into creating the mural.  It perfectly celebrates Ferryhill’s heritage and will be displayed in the Town Hall for many years to come’.

Councillor Makepeace said he was ‘pleased that the Council supported his motion.  Paul and Neve have produced an excellent interpretation of the Town’s heritage for future generations’.

Anyone wishing to view the mural can do so during normal office hours.  Please contact the Town Hall before setting off to make sure the room is not being used.