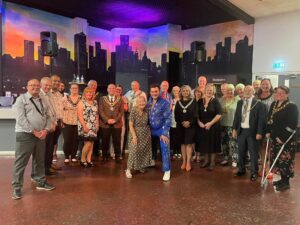 The Mayor of Ferryhill, Councillor Carole Atkinson held her first charity event of the year on Friday 19th August, and what better way to start than with an Elvis Tribute Night at Ferryhill WMC.

Entertainment was provided by Mark ‘Elvis’ Nixon, who, as always provided fabulous entertainment.  The evening raised the fantastic amount of £906, this will be divided between the Mayor’s chosen charities, Endeavour Woodcrafts & Ferryhill LADDER Centre.

Mayor, Councillor Carole Atkinson said after the event “I am over the moon with the amount raised for my chosen charities, this was the first event I have organised as Mayor of Ferryhill and I am overwhelmed by the support I have received from local people, I would like to thank everyone who came along to see Elvis, to those who donated prizes, to the staff and Committee at Ferryhill Workingmen’s Club for all their help, to everyone who helped make the evening a success and last but not least thanks to Mark ‘Elvis’ Nixon, it was a brilliant night!”