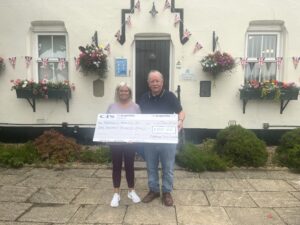 Ferryhill Athletic FC have become the latest group to benefit through Ferryhill Town Council’s Members Initiative Fund.  Launched in April 2022, the Fund has now seen a total of £3,850 being donated to support local projects and initiatives.

In a cheque presentation held at Ferryhill Town Hall, Councillor Sue Jones presented a cheque for £100 to Fraser Reynolds from Ferryhill Athletic FC.  Funds will be used to purchase a new Match Day Football Strip.

Originally formed in 1921 Ferryhill Athletic FC played in both the Northern League and Wearside League for 60+ years before eventually folding in 2006.  With a large football following, it may have taken 15 years to resurrect the Club, but with the whole Town supporting them, and with aspirations to return to Northern League Football the team are destined to grow from strength to strength.

Councillor Jones said ‘I am delighted to be able to support Ferryhill Athletic FC.  It is great to see the Team reform and back playing at their old ground, at Dean Bank Park.’