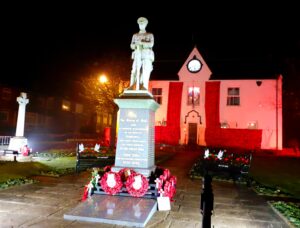 Ferryhill paid a fitting tribute on Remembrance Sunday to all those who fought and gave their lives during two world wars and conflicts since.

This year’s acts of Remembrance needed to be carried out differently because of coronavirus and the national lockdown.  This did not prevent residents of Ferryhill marking Remembrance Sunday.  As the services at St. Luke’s Church and the Town Hall Garden could not be held in the usual way, many people observed the two minutes silence at 11.00am at their front doors.

St. Luke’s Church live streamed a Service of Remembrance from the Church. The Last Post and two minutes silence was live streamed from the Town Hall Garden, followed by the laying of wreaths by the Town Mayor, Councillor Joe Makepeace and Deputy Mayor, Councillor Jacqueline Cansella on behalf of the Town. Ex Bugle Major Garry Suggett, who played the Last Post laid a wreath on behalf of The Light Infantry, The Royal Green Jackets and The Rifles, and Lee Carter (Tommy), Ex Second Battalion Light Infantry raised the flag, and laid a tribute on behalf of the Rifles.

The Town Hall gates were opened from 12 noon to enable wreaths to be laid on behalf of organisations, groups and individuals.  A total of 36 wreaths were laid.

As the night drew in, the Town Hall was lit up red as a further act of Remembrance.  This illumination of the Town Hall will be continued until Armistice Day on 11th November.

The Town Council would like to thank everyone who was involved in this year’s Remembrance arrangements, and especially St. Luke’s Church, the Royal British Legion, Ferryhill Town Band, Ex Bugle Major Garry Suggett, Lee Carter, Ex Second Battalion Light Infantry, Parade Marshall Alan Thompson, and Ferryhill Remembers for producing the beautiful poppy nets that adorn the front of the Town Hall this year, as well as the poppy tributes around the Town.

The Town Council appreciates that many people including veterans were disappointed at not being able to host this years commemorations in the usual way, but would like to thank everyone for their understanding during this difficult time.