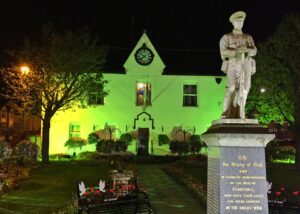 The Surtees Doorstep Green, Duncombe Cemetery, Mainsforth Sports Complex and the King George V Playing Field in Ferryhill have all been recognised this year, by the Green Flag Award Scheme as being four of the very best facilities in the UK.

The facilities are among a record-breaking 2,000 UK parks and green spaces across the Country, that have received this years prestigious Award, which is the international mark of quality for parks and open spaces.

In a year when millions of people have recognised the value of having great quality green open spaces on their doorstep, Ferryhill Town Council will be joining other Green Flag organisations across the Country, to mark the occasion, by turning the Town Hall green.

The Green Flag Award scheme, managed by environmental charity Keep Britain Tidy under licence from the Ministry of Housing, Communities and Local Government, recognises and rewards well-managed parks and green spaces, setting the benchmark standard for their management across the United Kingdom and around the world.

“This year, more than ever, our parks and green spaces have been a lifeline and we know that millions of people have used them to relax, meet friends, exercise or simply escape for a short time”.

“It is testament to the incredible dedication and hard work of staff and volunteers who, despite the challenges this year has faced, have still managed to achieve the highest international standards demanded by the Green Flag Award.”

Ferryhill Town Mayor, Councillor Joe Makepeace said “To celebrate achieving 4 Green Flag Awards this year, Ferryhill Town Council will proudly be joining other winners around the Country to light up their facilities green. Ferryhill Town Hall will turn green for three consecutive nights from the 14th -16th October to join the wave of green light spreading across the Country, demonstrating its support for every high quality green space, and fantastic staff and volunteers that continue to maintain them.”